Dan Auerbach was an accomplished musician who played 14 different instruments, mainly mandolin family, banjo, guitar, pennywhistle, and Irish frame drum. He loved music and loved playing music with others, always encouraging them to express themselves and increase their own abilities. He consistently contributed to the music scene wherever he was located. In the last 36 years, living in Thousand Oaks, he played in sessions, composed, taught music, and set up and maintained the website, TheTuneSpectrum.com, which features transcriptions of over 1,000 tunes with a MIDI file of each, and many of them having links to exceptional YouTube performances.

As an engineering student at UC Berkeley in the 1960’s, he pretty much abandoned his technical classes and instead taught himself music and played on the radio on programs such as Midnight Special.

When it was “be drafted or enlist,” Dan joined the U.S. Army and was stationed in Fort Carson, Colorado during the Viet Nam war as a radar repairman. There, when not on duty he often played traditional music in the local coffee houses.

While in San Jose, he played upright base in an all-girl jazz band to help pay for school. And, he ran a traditional music group, the Coyote String Band.
He met Cassandra, his future wife, when she came onboard in 1975. They played music together starting in 1977, and were married in 1979.
He moved to Florida in 1975 and mainly did music informally for several years. He joined and participated in the Guild of American Luthiers from 1980.

Dan moved to California in 1984. In 1985, he won 1st place, Advanced Mandolin, at the Topanga Fiddle and Banjo Contest.

He designed and built the first inside-tunable bodhran. Dan started making and selling them, label “Mountanbrook.” When mass-produced tunable bodhrans started to become easily and cheaply available, he stopped making his own. 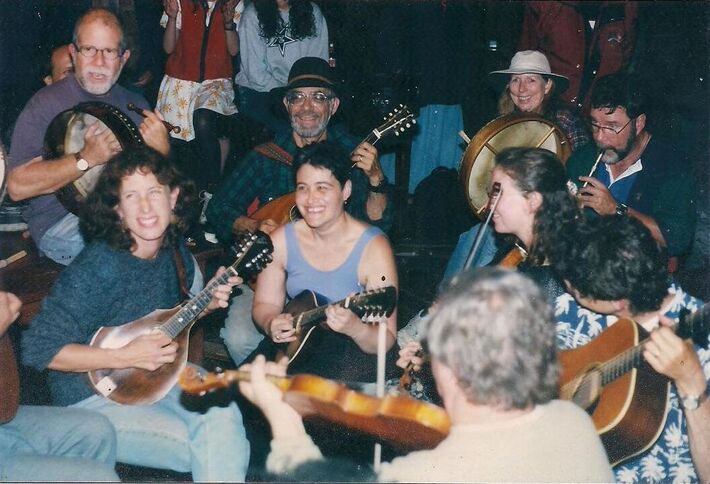 Dan started attending Lark Camp in the Mendocino Redwoods in 1997 and went regularly until 2009. There, he taught beginning bodhran one year and gave private help on mandolin and guitar as requested.
In 1997, he played back-up on self-titled “Sheer Pandemonium” CD.
Here’s a link to one set, with Dan playing cittern and one of Dan’s pieces, “Valse Happening”.

After retiring from the aerospace industry in 2009, Dan taught music privately at his home.

Dan started attending the sessions at the Celtic Arts Center in North Hollywood and performing in the ceilis and participated until the 2020 COVID shut-down.

During this time in California, he also attended Irish sessions in Santa Barbara and Ventura. He and his wife headed up sessions in Agoura. Then, they held sessions at his home in Thousand Oaks in 2019.
In January 2020, there was a 79th Birthday Party for Dan at his home, with many musicians in attendance.

His main wishes were to get his musical instruments into the hands of those who would play them. Email auerbachestate@aol.com for info on what’s available. And, to keep the music happening, please utilize TheTuneSpectrum.com!

"I’ve known Dan Auerbach for several years and have first-hand knowledge of his music teaching abilities.  He taught me how to play a whole new style of music I had never been exposed to – Celtic music.  He spent a lot of time and energy transcribing music for me, then sitting down with me and going over the tunes until they were ingrained.  He was careful to ensure that  I not only knew the notes, but that I used the proper musical expression.  He introduced me to local musicians who also play Celtic music, and taught me how it should be played in a group setting.  As a result, I now play the music with confidence, no matter who I happen to be playing with.

Dan also has extensive technical knowledge, particularly in audio, analog circuit design, and electro-optics.  At Northrop Grumman he played a key role in perfecting our fiber optic gyro systems.  He has explained to me the concepts involved so that I have a pretty good understanding, even though I am a software engineer.

Recently he has been tutoring students in math and physics, and I’ve seen the excellent tutorials he has written.  Rather than just regurgitating what can be found in the latest textbook, he does his own research on the subject.   He traces the history of the subject to discover what let to its development, and with that background he is able to present the material in a way that is easy for the student to grasp.

I would recommend Dan for any teaching or tutoring position.  He has the knowledge and enthusiasm that should be very helpful any student."
- Jerry Bell